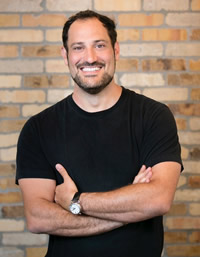 David grew up on the kitchen counter top and has been cooking for as long as he can remember. He was the corporate chef for Willow Street Wood-Fired Pizza (2001 -2005), the executive chef at Scala’s Bistro (2006-2007), as well as Kansas City Prime in Philadelphia (1996 – 1999). He has been awarded 2 ½ stars from the San Francisco Chronicle and the 3 stars from the San Jose Mercury News. He was named one of the Bay Areas Top 100 Chefs 2007. In 2012, after teaching culinary for four year, David joined his wife, Mistie’s, company, EyeSpy, as a full time Back of House & Chef Consultant. He joined Oren’s as Executive Chef in 2013.

David holds a culinary degree from Le Cordon Blue London & a bachelor’s degree from Cornell University in City & Regional Planning. He is a Certified Executive Chef by the American Culinary Federation.

Get the latest scoop on Oren’s Hummus!